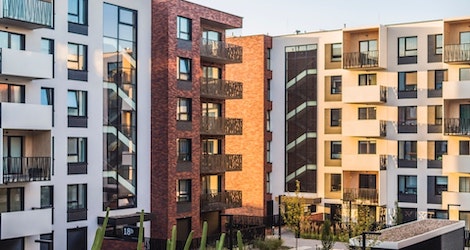 Modern solutions to your compliance needs

Partner with a proven leader in the affordable housing industry.

Our easy to use Dashboard provides a simple interface for property staff to submit files for review. We operate a secure, dedicated server, meaning you can submit files whenever it's convenient for you.

Keep corporate staff in the loop with our Corporate Dashboard, an option available to all clients for no additional fee.

Our Dashboard provides you with the ability to affordably manage risk, without compromising on quality and expertise. 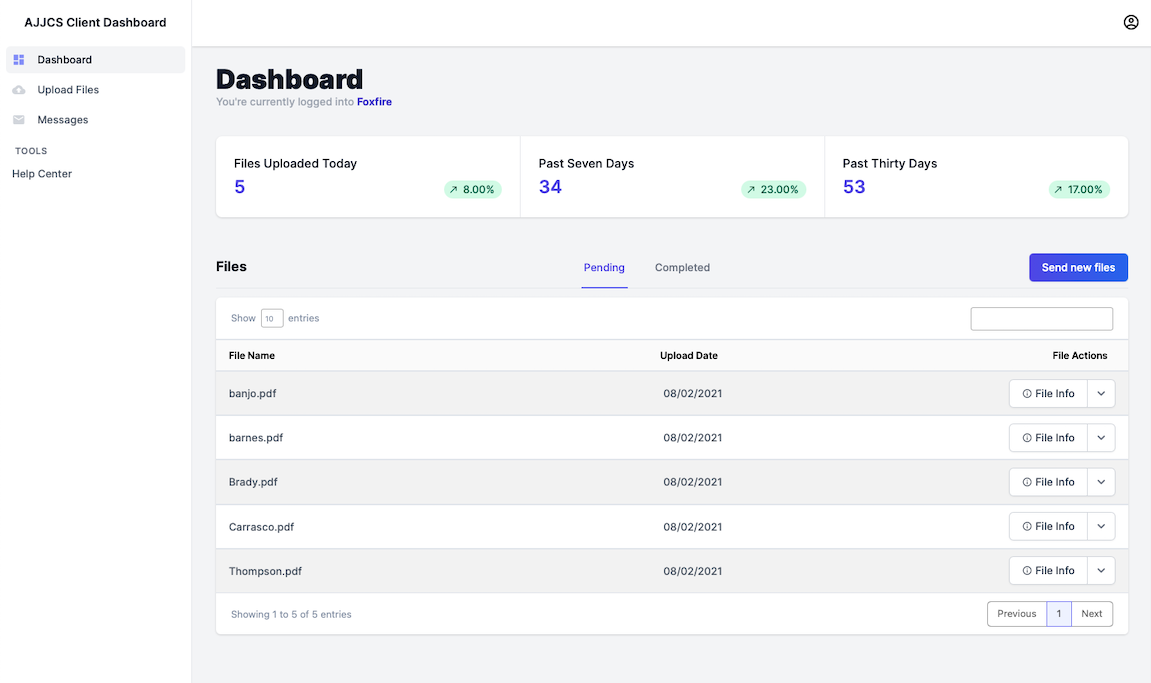 We offer a wide variety of training courses designed to meet the needs of all members of the affordable housing industry. We're also able to cater training to your specific needs.

All training is conducted by A. J. Johnson, a national leader in affordable housing compliance, so you can be confident that the information presented is accurate and complete. 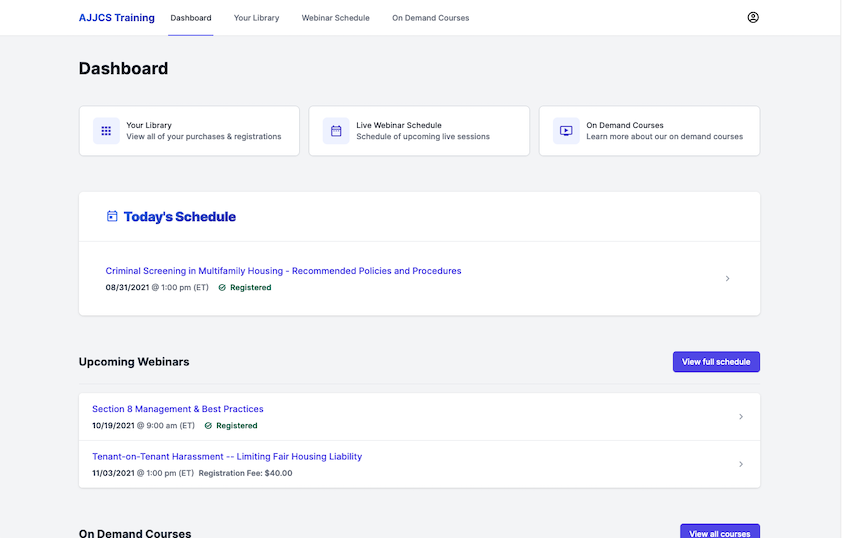 With over 100 years of combined experience in the affordable housing industry, our team can help you confidently manage risk.

What makes us different?

A. J. Johnson Consulting Services, Inc. is a small firm. That is by design – not by accident.

By staying small, we maintain a great deal of flexibility, a collegial atmosphere, hands-on opportunities for each individual, and grassroots ingenuity. With only six professional staff, each person recognizes their full worth to the company, leading to two-way loyalty — in good times and bad.

The single greatest advantage to our small size, and the main reason we resist excessive growth, is the ability of management to be involved in the work process and product. Clients always have the opportunity to work with decision-makers, and no report goes to a client without first having been reviewed by A. J. Johnson.

All of our staff members are experts in multifamily housing programs, and draw on a wealth of knowledge gained through real world experience.

Our knowledgeable staff is dedicated to providing superior service and adapting quickly to each client’s needs.

We work closely with our clients to ensure their specific needs are addressed.

Our ability to leverage the latest technology translates directly into cost savings for our clients.

Ready to get started? Let us know how we can help you.

On June 30, 2022, the U.S. Census Bureau released the 2021 Population Estimates by Age, Sex, Race, and Hispanic Origin. The report shows that the last two decades have seen the country grow continuously older. Since 2000, the national median age - the point at which one-half the population is older and one-half younger - has increased by 3.4 years, with the largest single-year gain of 0.3 years coming in 2021. The median age in the U.S. is now 30.8. The median age for most states also increased from 2020 to 2021, indicating their populations are getting older overall. Utah remains the youngest state in the nation with a 2021 median age of 31.8 - up from 31.5 in 2020. The District of Columbia has the second-lowest median age (34.9) but had the largest increase - 0.5 years from the 2020 age of 34.4. According to the Census Bureau, "With birth rates trending downwards and the aging of the Baby Boom and Generation X cohorts, the median age will likely continue to rise in the coming years." Only one state s population - Maine - became slightly younger, as its median age decreased from 44.8 to 44.7. However, Maine remains the state with the oldest median age in the nation. Only three states have no change in median age - Montana (40.1), New Hampshire (43), and West Virginia (42.8). These are also among the oldest states in terms of median age. The median age in 57% of all U.S. counties and equivalents increased, and 74% of counties had higher median ages than the nation as a whole. Six counties had median ages greater than or equal to 60 years - Sumter County, FL (68.3); Kalawao County, HA (65.5); Catron County, NM (61.8); Harding County, NM (60.3); Charlotte County, FL (60.2); and Jeff Davis County, TX (60). The counties or equivalents with the youngest median ages in the nation were Lexington City, VA (22.2); Todd County, SD (23); Kusilvak Census Area, AK (23.7); Madison County, ID (32.7); and Radford City, VA (24.4). The median age increased in about 76% of metro areas between 2020 and 2021. The three largest increases were in Lake Charles, LA, where the median age rose from 36.5 to 37.4; Hilton Head Island-Bluffton, SC, which increased by 0.8 years to 47.8; and San Francisco-Oakland-Berkeley, CA, where the median age crossed the 40-years-of-age threshold, increasing from 39.4 to 40.1. Provo-Orem, UT was the metro with the lowest median age in 2021, and The Villages, FL, had the highest median age - 68.3. Not surprisingly, The Villages is located in Sumter County. Regionally, the Northeast was the oldest in 2021 with a median age of 40.4, followed by the Midwest (39), the South (38.6), and the West - which experienced the largest increase, 0.3 years to 37.7. In addition to aging, the nation is becoming more diverse. Nationally, all race and Hispanic origin groups experienced population increases, with the exception of the White population, which declined slightly by 0.03%. The Native Hawaiian and Other Pacific Islander population was the fastest-growing race, increasing by 1.54% between 2020 and 2021. Population breakdowns follow: White: 260,183,037 (down 79,836 since 2020);Black or African American: 49,586,352 (up 0.7%);Asian: 23,962,215 (up 1.2%);American Indian or Alaska Native: 7,206,898 (up 1.0%); andNative Hawaiian or Other Pacific Islander: 1,709,860 (up 1.5%). The Hispanic (any race) population grew by 767,907 from 2020 to 2021. California, Texas, and Florida have the largest Hispanic populations. Only New York (-1.1%) and the District of Columbia (-2.5%) experienced drops in the Hispanic population. Maine (5.4%) and Montana (5.4%) were the states with the fastest-growing Hispanic populations. There are two major takeaways from the data: The nation is growing more diverse; andIt is getting older. For affordable housing developers and housing agencies, this indicates continuing growth in the need for senior housing - especially housing that provides the amenities and services required for "aging in place." The growth in diversity serves as a reminder that discrimination based on national origin is a violation of federal fair housing law. Owners of multifamily housing must be willing to work with prospects for whom English may not be the primary language and should have policies and procedures in place for doing so.

A.J. Johnson will be presenting Average Income Minimum Set-Aside: Requirements and Best Practices on July 19, 2022, at 11:00 am (EST). This class will be offered through Colorado Housing and Finance Authority s chfareach educational programming for affordable housing property owners and managers. The one-hour live webinar will review the requirements of the Average Income Minimum Set-Aside Test (AI), discuss the risks of this set-aside, and provide best practice recommendations for implementation of the Average Income test. It will also cover the current IRS guidance relating to the AI set-aside and recent industry requests made to the IRS. The webinar will be presented by A. J. Johnson, a nationally recognized expert on affordable housing who has  provided compliance oversight on multiple properties using the AI set-aside To register, please visit the chfareach webpage at this link.

A. J. Johnson will be conducting a webinar on June 29, 2022, on Criminal Screening in Multifamily Housing - Recommended Policies & Procedures.  The Webinar will be held from 1:00 PM to 2:30 PM Eastern time. Property owners may (and should) screen applicants for criminal behavior but must be careful when doing so - and must have transparent and defensible policies relative to screening for past criminal conduct. This 1.5-hour webinar will assist owners and property managers in understanding what is required when implementing a criminal screening policy. The training will outline the HUD guidance relative to criminal screening and will review the type of policies that are - and are not - acceptable. The discussion will center on (1) the types of crimes that are appropriate for screening; (2) the HUD policy regarding the use of arrest records in criminal screening; (3) dealing with convictions for non-dangerous crimes; and (4) the use of individual assessments for rejected applicants. Following the session, participants will be better prepared to develop a criminal screening policy that will not run afoul of fair housing law. Those interested in participating in the Webinar may register on the A. J. Johnson Consulting Services website (www.ajjcs.net) under "Training Schedule."

Send us a message